The origins of the Malankara Mar Thoma Syrian Church date back to AD. 52. The Apostle, St. Thomas, one of Jesusâ€™s 12 disciples, arrived in Cranganore, on the coast of Malabar in southern India. He spread the Gospel among the Hindu and Jewish settlers. He established seven churches: Malankara, Palur, Parur, Gokamangalam, Niranam, Chayal, and Kalyan. The first century Christians were called Nazarenes, or Mar Thoma (Saint Thomas) Christians. A few families among them where chosen to be responsible for the administration of the Christian community. St. Thomas continued his mission and reached the east coast of India (Kerala), where he later died a martyrâ€™s death at a place now called â€œSt. Thomas Mountâ€. Over centuries, the church has continued to grow and reform, migrating to other parts of India. The traditional form of worship and time-honored ritualistic practices were maintained. Mission work and evangelism were given high importance. In later half of the 20th century, congregations and parishes began forming outside of Kerala to other parts of the world. The Mar Thoma Church developed church organizations, schools, colleges, theological institutions, hospitals, homes for the destitute, old age homes, social welfare establishments, vanita (ladiesâ€™) hostels, technical institutions, study centers, camp centers, publications, ashrams and mission fields, throughout Kerala and the world. The Mar Thoma Church is an active member and provides leadership to the World Christian Council and the Council of Christian Churches in India. At present the Mar Thoma Church has over 1000 parishes, with its headquarters in SCS Campus, Tiruvalla, Kerala, India. In the late sixties and early seventies, Mar Thoma families immigrated to North America and Europe for higher education and employment opportunities. â€œThe small communities gathered as prayer groups to maintain and foster their spiritual identity. In 1972, the first regular Mar Thoma service began in New York. This laid the foundation for the formation of a number of parishes and later the establishment of â€œThe Diocese of North America and Europeâ€ in 1988. By 1980, the Mar Thoma Church entered in a relationship with the Episcopal Church of North America to enhance its growth within the country.â€ In the late eighties and early nineties the Mar Thoma Church has grew immensely in the USA and Canada. There are roughly over 5,000 families and 20,000 members in this Diocese. A handful of these individuals currently reside in Houston, Texas.

Immanuel Mar Thoma Church of Houston, Texas was formed on September 01, 1994, marking another milestone in the journey of the Mar Thoma Church in North America. The grace of God, the vision and dedication of a few lay leaders of the parish and the timely guidance of our then Diocesan Bishops Rt. Rev. Dr. Philipose Mar Chrysostom Suffragan Metropolitan and Rt. Rev. Dr. Zacharias Mar Theophilus Episcopa, and clergies Rev. Eapen Cherian, Rev. T.I. Joseph, and Rev. Raju George paved the way for the formation of a second Mar Thoma Church in Houston. Initially the parish consisted of 140 families, nearly all of whom were members of the Trinity Mar Thoma Church of Houston.

On August 29, 1993 a general body of the potential members of the new church was convened to elect a new expanded 45 member building committee. Subsequently, two sub-committees were formed; a Working committee (convener â€“ Mr. P.M. Jacob) responsible for the construction of the new church and a Finance committee (convener â€“ Mr. M.A. Varughese) to help facilitate the fundraising. A memorandum, duly signed by the 145 families, requesting approval to form and build a new Mar Thoma Church was submitted to the Episcopal Synod through the Diocesan Bishop, Rt. Rev. Dr. Zacharias Mar Theophilus Episcopa. The Synod then agreed to sanction a new parish for us, as and when the availability of a worshipping place was reported. This matter was communicated to us by the Diocesan Bishop through a kalpana dated June 16, 1994.
Based on this kalpana, Rev. Raju George Ancheri called for a general body meeting on June 26, 1994 and obtained the approval for leasing the building located at 2505 South Main, Stafford, for our worship.

Our then Metropolitan The Most Rev. Dr. Alexander Mar Thoma and our Diocesan Bishop Rt. Rev. Dr. Zacharias Mar Theophilus visited the new church site in July 1994 and bestowed their blessings. The Metropolitan issued a kalpana on July 26, 1994, declaring the formation of the new parish to be known as â€œImmanuel Mar Thoma Church of Houston, Texasâ€ effective from September 01, 1994. Rev. Raju George was appointed as the vicar and Rev. T. I. Joseph was appointed as the associate vicar. As per the directions from the Diocesan Bishop, Rev. Raju George notified all Trinity Mar Thoma Church members to reconfirm their interest in joining the Immanuel parish before the deadline of August 21, 1994. 20 families from Southwest Houston area withdrew and 15 new families from other areas joined, thereby bringing the total to 140 families in the Immanuel Mar Thoma Church. Sunday school classes and regular prayer meetings were started from September 10, 1994. The first general body meeting of the IMTC was held on September 18, 1994 in which the aforementioned corporation was dissolved in favor of the Immanuel Mar Thoma Church of Houston, Texas. Seven area prayer groups were formed followed by the election of office- bearers and committee members.

On Sunday October 2, 1994, the Diocesan Bishop Rt. Rev. Dr. Zacharias Mar Theophilus consecrated the temporary place of worship at 2505 S. Main and conducted the first Holy Communion worship service. Later that day, His Grace, Rt. Rev. Dr. Zacharias Mar Theophilus Episcopa laid the foundation stone for the new Immanuel Mar Thoma Church. Following this, the general body of the church approved the master plan, the elevation and the floor plan for the sanctuary to be built at the property located at 12803 Sugar Ridge Blvd, Stafford, Texas. Rev. Skariah Varghese took charge as the new full time vicar on January 19, 1995. The general body meeting held on March 12, 1995, unanimously decided to award the design / build contract to Roy Harper & Associates and Construction Ltd. of Houston for the construction of the church. In 1995, when the lease for the current building expired, another space in a retail building located at the intersection of Murphy Road and W. Airport Blvd in Stafford was rented for worship.

Construction of the Church building was started in the month of May, 1995 and was completed in less than six months attesting to the vision, commitment and cohesive efforts of the parishioners. Total cost of construction for the 8,500 sq.ft. Church building was $764,325.00. The new church building was dedicated for the glory of God on December 23, 1995 by the Rt. Rev. Dr. Zacharias Mar Theophilus Episcopa. The ceremony and the public meeting were attended by a large gathering of about 1500 people. Thus on this day, the long cherished dream of building a permanent place of worship became a reality. As part of the initial phase, a parsonage (a 2,500 sq.ft. 2-story house), a basketball court, and additional parking spaces were completed on the church property.

In 2004, the church embarked on an ambitious project to build a full-fledged multi-purpose hall with separate Sunday school class rooms and added amenities to meet the ever growing needs of the church. Construction of the spacious 20,000 sq.ft. building was completed in 2009. The beautiful facility, known as Immanuel Center, was dedicated on October 24, 2009 by the Diocesan Bishop, Rt. Rev. Dr. Geevarghese Mar Theophilus Episcopa. Rev. Varghese Mathew served as the vicar from 2004-2007 followed by Rev. T. S. Philip from 2007-2009. Mr. Jacob Thomas (2004-2006) initially served as the building committee convener followed by Mr. Jackson Jacob (2006-2009). Mr. Jackson Jacob (2004-2006) initially served as the joint convener followed by Mr. Abraham P. Varghese (2006-2009). Total cost of construction for the building was 3.5 million dollars.

In 2009, our parish hosted the â€œMar Thoma Family Conference of the Diocese of N. America & Europeâ€ for the first time. The parish also hosted the â€œMTVEA National Conferenceâ€ in 2015. Our church organizations play a vital role in the growth and continued spiritual development of the parish. As a mission oriented parish, we are active participants in the Mexico Mission project of the Diocese as well as numerous other humanitarian projects in the USA and India. It is our hope and prayer that the spacious and beautiful sanctuary, the splendid auditorium, the large plot of land, and the rich pool of talents and resources among the parishioners would provide numerous possibilities to the life and growth of the Mar Thoma Church in this part of the world. As we continue our journey of faith, it is our fervent hope and prayer that this parish would ever remain a sign of Godâ€™s call and mission entrusted to the Mar Thoma Church! 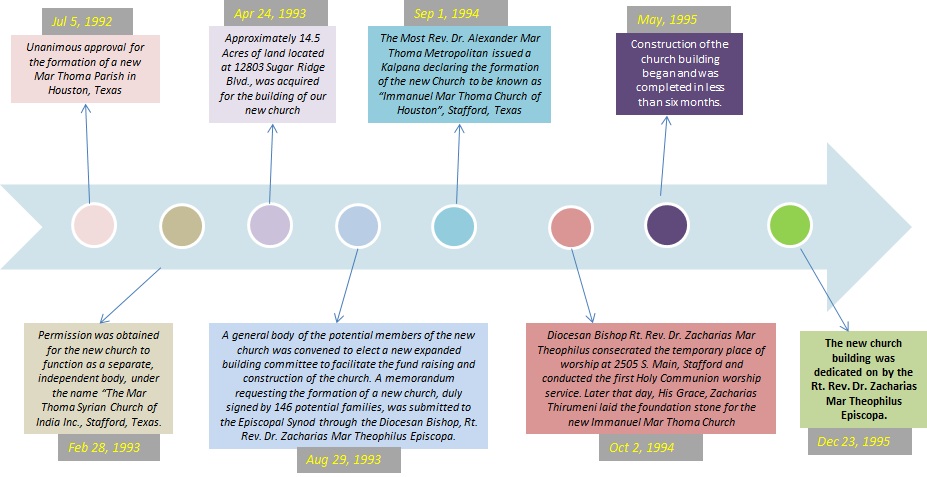 The church membership has been growing steadily from its inception in 1994 with 140 families to over 400 families by early 2015.